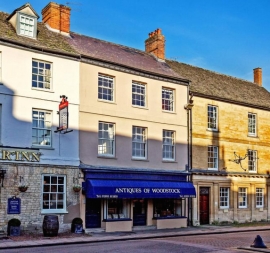 Antiques are such that these can effortlessly add a sense of history and elegance to any home. These are versatile and can sit well in contemporary as well as traditional decor and it is a bonus if the antique is also functional.
This section of Antiques of Woodstock often features a classic variety of antique oak coffers, French chests, antique storage chests, antique oak chest, upholstered antique ottoman and gothic chests. Here at our antique oak furniture shop in Oxfordshire UK all our pieces are from the 16th and the 17th century and most in great condition.
Visit us or browse through the website to see all the options.

An antique dresser can be a very stylish feature in the contemporary homes. It often effortlessly manages to add charm and character to a setting. e often have a good collection of dressers from the 17th century onwards including a wide range of antique oak dresser, oak low dresser, 19th century oak dresser, pot board dresser, elm dresser, oak dresser base, breakfront dresser and Lancashire dresser etc.
If you do not see exactly what you are looking for please contact us. We have many items in storage awaiting restoration. We also can undertake a search for you through our extensive client base and associated trade contacts.

Chests of drawers are perfect examples of style and function providing antique look as well as ample storage space.

With restoration kept at its minimum, these often retain their age and character.

Antique cupbpoards are practical and ornamental. With their elegant form these are versatile antiques that work in most rooms and often offer great storage capacity making them practical and versatile.
Browse through this antique cupboards section to see our fine collection of antique cupboards such as oak two door cupboard, antique oak armoire, oak food cupboard, oak press cupboard, oak court cupboard, two door cupboard and Gothic cupboards.
Do try to visit us at Woodstock Antiques in Oxfordshire UK where we offer antique oak furniture.

Antique settles and settees / sofas provide you with style and comfort and at the same time come packed with a historic charm. At Antique Oak Furniture we have some fine examples of antique seating options in terms of styles, designs and colours. Examples often include antique oak settees, wing back settees and  Queen Anne style settees.

This section features our collection of antique wooden writing slopes, bible storage boxes, wooden vintage writing box, antique bible box, etc. Back in the 17th century, these Bible boxes were used for storage or display of the Bibles. These are typically small wooden containers that can store one or more bibles.

These boxes were produced in a variety of styles and materials. The materials used included ceramic, wood and even metal. Some showcased ornate carvings and etchings, which were often biblical scenes.

Antique carvings and statues make the perfect focal point in a room. Whether it is an antique wood panel carving or a statue it will make a statement. Apart from their decorative potential antique carvings and statues, also make a very fine addition to any art collection. These come in different forms, each handcrafted piece being unique and elegant.
This section features a classic variety of statues and carvings, often including bronze antique statues, antique wood carvings, antique carved wood panels, marble statues, oak panels, carved wooden statues, antique oak carvings and antique bronze statues. Browse this category to see our collection.

Browse through this section to have a look at our fine selection of antiquities, medieval antiques, ancient roman artifacts, Stoneware antique, mugs, stoneware jars, Chinese bowls, Roman oil lamps, medieval jewellery, medieval bronze rings, 17th century pewter spoon, medieval pottery lamps and much more.
Our stock makes one of the finest collections of the utilities of the past that make unique decorative and collectible items in the modern homes. Walk through this section to have a look at each and every unique item in our collection.

In this section of Antiques of Woodstock we include a classic variety of antique stoneware, antique corbels, stone corbels etc. Unique antique pieces make a fine addtion to classic or contemporary decor giving an air of sophistication. Decorating a place with pieces collected from different places always stands out. These wonderful and charming antique accessories  are such that can make outstanding gifts as well which will be well appreciated and valued by the recipient. Browse this stonework collection.

This section showcases a few fine examples of antique metalware. It often includes brass candelabra, antique brass candlesticks, waffle makers, pewter plates, brandy warmers, the very early versions of the pestle and mortar and the like.
If you want us to source it other antique metalware for you please use our ‘Antique Search Service’.

Here we often have a fine selection of antique tapestries including Aubusson and European Tapestry  from the 17th and 18th century.
Tapestry was a key component of grand court style during the eighteenth century.  Tapestries have  remained an essential component of European court splendour.  French tapestries were one of the most significant periods of tapestry weaving giving us some of the finest examples seen today. These designs took inspiration from the medieval tapestries and the Arts and Crafts Movement revival giving you an antique tapestry of classical elegance.

With the current trends calling for mixing and matching, more and more people are going in for the eclectic appearance for their homes. This trend has extended to include office spaces making the work spaces look unique and incorporating antiques such as antique desks, antique bureaux or old oak writing bureaux etc.

If you do not see exactly what you are looking for please contact us. We have many items in storage awaiting restoration. Also we can undertake a search for you through our extensive client base and associated trade contacts.